Jesse Norman has welcomed the news that local business Pedicargo has won a Government grant enabling it to buy its next e-cargo bike - under a scheme set up by Jesse himself as Transport Minister!

Pedicargo, led by Will Vaughan, is Herefordshire's pioneering pedal-powered recycling and waste collection company, The new grant is for £1,000 towards a new £5,000 specialist e-cargo bike.  Pedicargo's bikes are a familiar sight around Hereford, picking up paper waste and recyclables around the city.

Jesse set up the e-cargo bike scheme when he was Transport Minister, in order to support the development of no- and low-carbon transport in towns and cities. It comes as part of the Road to Zero transport decarbonisation strategy, also launched by Jesse.

Congratulating the company, Jesse said: "Pedicargo have been a pioneer in this whole area, and I am delighted that they have received this grant. We need more cargo bikes if we are going to reduce emissions and protect our historic streets--and our citizens. Let's get them in Ross and our other market towns as well!" 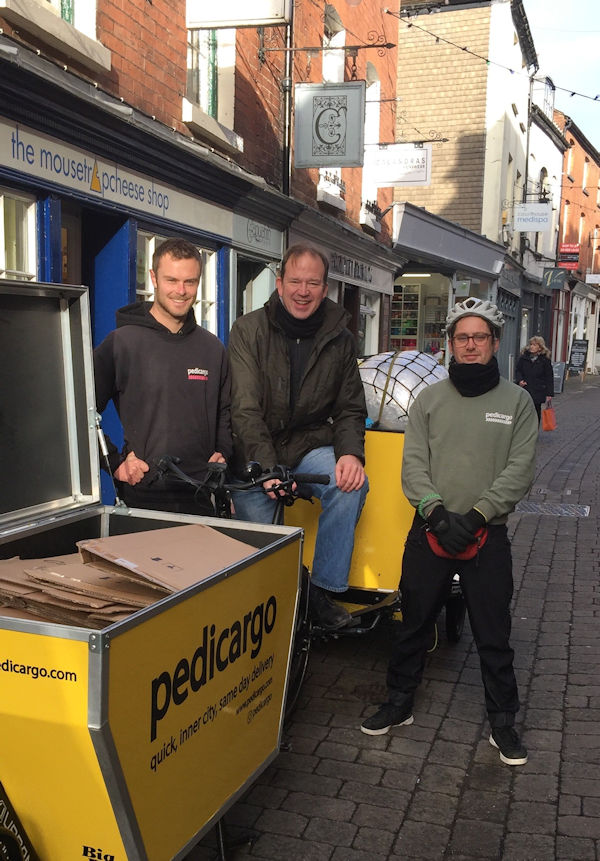 Jesse with Jean-Paul Baron and Callum Treasurer of Pedicargo in Church Street.